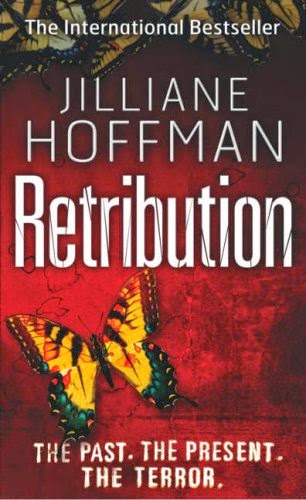 I’m usually not that much of a thriller reader, but when a friend recommended Jilliane Hoffman’s Retribution to me I decided to give it a try and I was not disappointed.

Retribution is the first novel in Hoffman’s so-called C.J. Townsend series. It focuses on Miami state prosecutor C.J. Townsend who is one of the best in her field and deals with horrible crimes and crazy criminals on a daily basis. C.J. is known for always keeping her cool even in the face of the most cruel cases, that is until she faces the case of a especially brutal serial killer, whose pattern she recognises because she only barely escaped him years ago. She still bears the scars from that encounter and has tried to block out the horrible memories that come flooding back now that she is faced with her tormenter again. Trying to catch the killer who still tortures her in her dreams without having her colleagues find out about her, C.J. is on the verge of losing herself so deep in that case that the line between what is true and what is not starts to get so blurry that she threatens to lose control completely.

Retribution is definitely one of the most exciting thrillers I have read in a long time and a real page turner. Once you’ve picked this book up you won’t be able to put it down until you’re finished, trust me.

Even if you’re not usually a fan of thrillers, you should definitely give this one a chance, you won’t regret it!

“Life’s That Way: A Memoir” by Jim Beaver: Review